The Central Ohio Section met at the ASNT International Service Center on 30 August for a planning meeting. There were seven members present along with ASNT Chief Technology Officer James Bennett. Items of business covered included a review of and preparation for the Section’s annual projected budget as well as a discussion on the possibility of joining Columbus Technical Societies (CTS) for joint meetings with other technical societies in Columbus. Members present voted unanimously in favor of joining CTS. In addition, those present reviewed and planned monthly meetings for the 2016–2017 schedule, and also discussed hosting the CTS December 2016 meeting at the ASNT Center for Excellence. Finally, members discussed how recertification points might be awarded for CTS technical presentations. 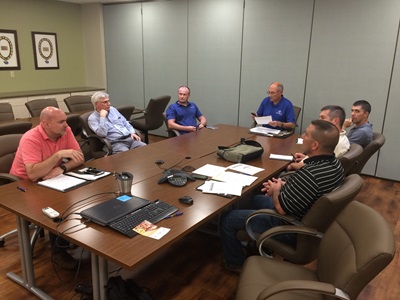 The Central Ohio Section met for a 2016–2017 planning meeting in August.

The Chicago Section met on 27 September, with 20 guests and members in attendance at the Crazy Pour restaurant in Villa Park, Illinois.

The guest speaker, Marty Anderson, of Global Technical Services in Anchorage, Alaska, discussed the theme “Underwater NDE.” Anderson is an ASNT NDT Level III in six methods, a NACE Coating Level 3, and is also an American Welding Society welding instructor and radiographic film interpreter as well as a member of several ASNT national committees. He has served on the Alaska Section board for eight consecutive years.

In his presentation, Anderson highlighted the nondestructive testing (NDT) processes that are conducted underwater. One of the most prevalent methods is magnetic particle testing, especially on offshore drilling platform legs to the mud mats and legs to the cans. Surfaces are cleaned using high pressure water blasting to remove the barnacles and sediment. A permanent magnet yoke is then affixed to the area to be inspected and the particles are squeezed out of a bulb and float toward the item to be inspected. Special lighting is required due to the dark conditions underwater. Level I technicians who are divers apply the particles and have a camera and lighting attached to their diving helmet. The image is transmitted and evaluated by a Level II aboard a vessel above. Typically, processes are qualified in a dive tank with known discontinuities before performing deep-water inspections.

Ultrasonic testing is also performed by a dive technician manipulating either a straight or angle beam search unit, with the test being monitored and interpreted on the instrument on board the dive vessel, by Level II technicians. Some equipment contains data logging capability and has self-contained calibration standards that the diver attaches to his/her arm or suit.

Radiography is also performed underwater with special isotope cameras and film holders that are watertight. The processing of the film is done topside on the vessel after exposure. The same rules apply as far as radiation safety and boundaries underwater.

Another method is alternating current field measurement (an electromagnetic technique similar to magnetic flux leakage), which is also performed underwater; however, clean surfaces are required. Video presentation and topside interpretation is also conducted, with two-way communication between the diver technician and the Level II interpreter aboard the vessel.

Dive training and NDT training for such severe conditions can take up to three to four years before a technician is competent enough to perform underwater. 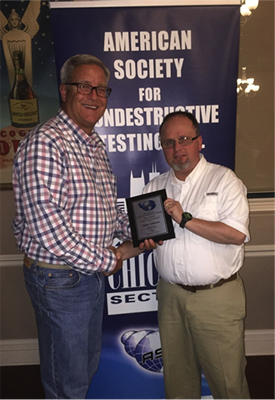 A technical meeting of the Columbia River Section was held on 22 September at Crazy Moose Casino in Pasco, Washington. Thirteen members and guests gathered for dinner, networking, and a presentation by Samuel Glass on electromagnetic acoustic transducer for rapid screening of waste storage tanks.

Thirty-four members and guests attended the Connecticut Yankee Section’s meeting at the Groton Elks Lodge in Groton, Connecticut, on 14 September. In attendance were new ASNT members and faculty from Norwich, Connecticut’s Three Rivers College, and members from the Narragansett Bay Section and Connecticut Valley Section. The guest speaker for the evening was Hanah Gant, who introduced Spark Makerspace, a community-run workshop and learning center, to the group. Gant is a civic entrepreneur and, assisted by Operations Manager Casey Moran and Will Szal, from a group from Boston called “metamorphosis,” outlined what was available within the doors of Makerspace and the courses offered to its members. Section Chair James Porter presented a Deck Prism and Section trophy to the group in appreciation of its presentation. Earlier in the evening, Bob Feole outlined the new Level II courses offered by ASNT and obtaining these certifications. Before finishing the evening, Barbara Johnson was awarded an ASNT keychain for her service to the Section. The Section wishes her much happiness in her retirement from General Dynamics Electric Boat. 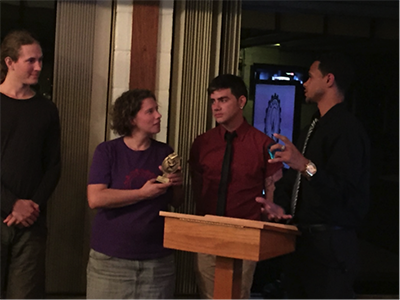 The India Section met in Chennai , India, on 27 August for a presentation by Kasi Viswanathan. The presentation was titled “Advantages of Advanced UT.” There were 30 members in attendance. 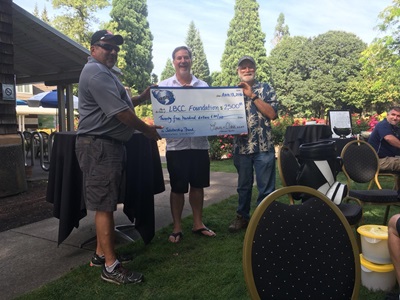 The Miami Valley Section met on 14 September at General Electric Aviation’s Quality Technology Center (GE-QTC) for a season kickoff tour. GE-QTC, home to the inspection and NDT under GE Aviation, has multiple roles for GE: advancing technology to ensure appropriate nondestructive testing capability for future materials, components, and systems; expertise for diagnosing problems in the field; and testing and streamlining new procedures prior to full-scale implementation at the factory. Joe Traxler was the host, along with Jared Frizzi, Walt Ulanski, Jim O’Connell, Brian Walin, and Rich Klaassen, who were excellent tour guides. Belen Fuller coordinated the serving of food following the tour.

The North Carolina Student Section hosted the 9th annual George Pherigo memorial golf tournament on 22 September, with more than 40 golfers in attendance. The students and industry professionals alike shared a day of eventually good weather, good food, and a chance to tee off with a modified AR-15 rifle that shoots golf balls out to 366 m (400 yards). Money raised from the event went to helping students in Central Piedmont Community College’s nondestructive examination program attend the ASNT Annual Conference in Long Beach, California. The students from Central Piedmont Community College would like to thank all the golfers and companies that helped to make the annual golf event a success, especially the largest sponsors: FlawTech; Sonaspection International, Inc.; and Structural Integrity Associates. 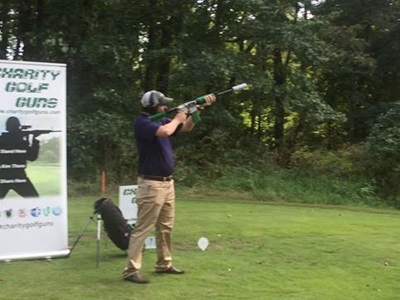 The Piedmont Section would like to thank Ron Ruggles, at Applied Technical Services, for letting members hold their meeting at its facility on 20 September. There were 12 members in attendance. Regional Director Hussein Sadek joined the meeting and gave an overview of what is happening within ASNT and upcoming events. The second speaker was Jim Molinaro, from Applus, who is the newly appointed media director for the Section. He showed attendees how to surf around the ASNT Community social network and share pictures, stories, and information pertaining to nondestructive testing. 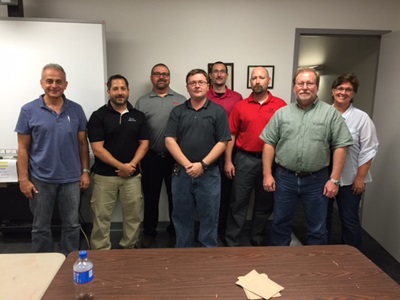 On 6 September, the San Diego Section hosted its first technical meeting of the 2016–2017 year, at the Best Western Seven Seas hotel in San Diego, California, with 25 members and guests in attendance. The speaker for the evening was Francesco Lanza di Scalea, from the University of California San Diego. The title of his presentation was “Detection of Major Impact Damage to Composite Aerospace Structures by Ultrasonic Guided Waves and Statistical Signal Processing.” The basis of this subject was work with the Federal Aviation Administration on impact damage to aircraft composite structures caused by ground-based equipment having blunt impact with the aircraft. The talk was well received and had numerous questions concerning the equipment used, what could be different in future studies, and applications to other substrates.

To close the meeting, Section Chair Aurapong McAnulty acknowledged the Section sponsors in attendance. The evening concluded with the regular raffles and a 50/50 cash raffle. Raffle prizes were sponsored by the Section and Hans Weber. All in attendance had a good time. 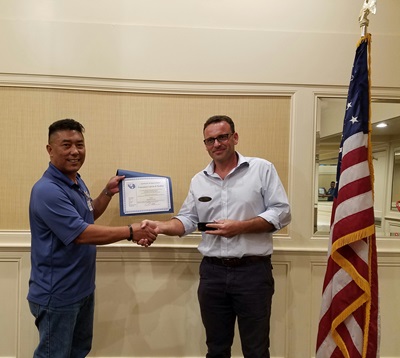 San Diego Section Chair Aurapong McAnulty (left) thanked Lanza di Scalea for his informative talk and presented him with a certificate of appreciation and a speaker gift.

The Saudi Arabian Section held its third technical dinner meeting for the fiscal year 2016–2017 on 19 September 19, at the Carlton al Moaibed Hotel in Dammam, Saudi Arabia. The Section sponsored meeting was attended by 98 members and guests, including guests from the Bahrain Society of Engineers.

Section Chair Abdullah Al Khalifah began with a welcome and announcements, where he reminded everyone of the Level III exams held on 2–3 December. After the announcements, he asked the guest speaker, Niels Pörtzgen, from Applus Velosi Netherlands, to start his presentation, titled “IWEX (Inverse Wave Field Extrapolation) Inspection for Carbon Steel and CRA).” Following the presentation, Al Khalifah presented Pörtzgen with a plaque, and then everyone in attendance enjoyed dinner by the hotel swimming pool. 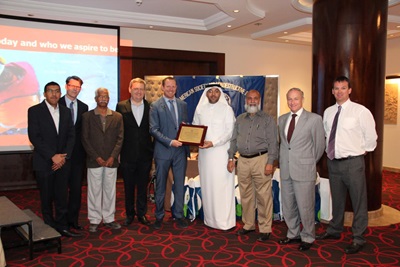 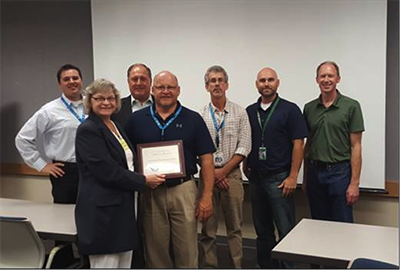