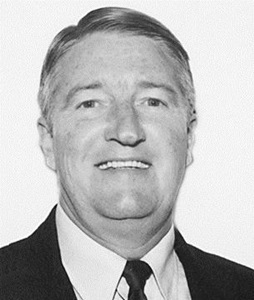 ASNT was Dewey’s second career. He served more than 30 years in the U.S. Army Infantry, entering as a volunteer during the Korean conflict. He was commissioned in 1954 and retired in 1983 as a colonel. In 1984, Dewey was elected to the Officer Candidate School Hall of Fame. Dewey brought his skills and leadership to ASNT at a time when the Society needed continuity at the top. In the seven preceding years, there had been three managing directors.

Dewey was a practical manager who helped move the Society forward in concert with the volunteer leadership. He was an exceptional financial planner, increasing the Society’s working capital and instituting a strategic plan with emphases on the use of retained earnings to improve membership benefits. Former Technical Services Manager Ronald Selmer once said, “Dewey is very budget-minded. He makes you stick to your budget. You may not always agree with him, but you have to give him credit for that.”

Dewey caused a dramatic increase in the number of educational materials available in the nondestructive testing community. His leadership was responsible for bold moves by the Society in public relations and marketing while consistently improving Society publications such as the Nondestructive Testing Handbook and Materials Evaluation. He created a new position while at ASNT, that of educational materials coordinator. As part of a team effort with ASNT councils, the move helped to launch ASNT’s publishing of paper summaries for conferences and topical meetings. Dewey also wrote the history from 1981 to 1991 in Pictures and Passages ASNT: 1941–1991.

Dewey instituted Board of Directors training and committee training, both of which helped improve Society operations. He also recommended the practice of choosing new executive directors using outside agencies, and that replacements should be experienced association executives.

By the time Dewey resigned in 1990, staff had increased from 23 full-time and three part-time in 1984 to 31 full-time and four part-time. ASNT activity had been computerized, with all employees having access to computers. This automation of processes also helped increased the Level III Program activity, doubling the number of examination applications in 6.5 years.

Dewey initiated recruitment campaigns that reversed a membership decline. During one of his monthly messages, Dewey stated, “Our membership is being motivated toward greater participation in ASNT.” ASNT’s membership rolls increased from 8825 members in June 1986 to more than 10 000 four years later. To facilitate this, Dewey worked to keep membership dues low to give members the most for their dollar. From July 1984 to August 1990, dues revenue as a percentage of total revenue decreased from 13.1 to 9.7%. Dewey also aided in fostering public relations, helping to increase the number of press releases being issued to editorial outlets and publications catalogs to both members and non-members.

Dewey was active with outreach and encouraging events and joint meetings with other societies. According to former Conference/Meetings Manager Barbara Runyon, “Dewey consistently worked with the councils toward conference enhancements, resulting in greater value per dollar to attendees.” As examples, she cited a newly implemented event sponsor program and improved volunteer recognition. She added that “Through the creation of ASNT’s newly implemented computerized registration system, Dewey has ensured that ASNT’s meetings are ready for the next 50 years.” Dewey also developed an overall strategic marketing plan to triple ASNT’s exhibition schedule from two-to-three to six-to-eight events per year.

Dewey was also instrumental in enlarging ASNT’s workspace. In spring 1984, ASNT’s leased office space was expanded, and in April 1990 the Society headquarters moved into its own, fully owned building, with Dewey acting as a “primary force behind hiring architects, deciding on a construction company, the financial aspects, and working with the banks and the county to successfully get a $1 million revenue bond approved.”

Channels were established to authorize and coordinate both the activities of staff and the use of resources. Dewey developed staff recognition and performance appraisal and compensation programs and virtually rewrote the staff policy manual. As a result staff turnover also decreased during Dewey’s time as executive director.

Dewey returned to serve as interim executive director from December 1996 to March 1997, and again from September 1999 to January 2000. He was the inspiration for the Executive Director Emeritus Award, established in 2000 to honor ASNT executive directors whose dedication and commitment are exemplary. Dewey was presented the award in 2000 and is the only executive director to date to hold this distinction.

This remembrance was published in the March 2015 issue of Materials Evaluation.