The Central Savannah River Area Section met with 15 members in attendance on 10 March at the Red Lobster in Aiken, South Carolina. The guest speaker was Nicole Gayotin of Waygate Technologies, who presented “Remote Visual Examination.” Gayotin performed a demonstration of a borescope’s capabilities and presented slides showing the final visual results. A brief meeting was held before the speaker’s presentation. The Section would like to thank Gayotin and Waygate Technologies for the presentation. 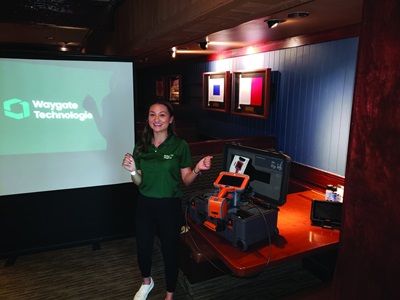 The Charlotte Section held a joint meeting with the North Carolina Student Section on 17 February in the nondestructive examination lab at Central Piedmont Community College’s (CPCC) Harper Campus. Vendor Night at CPCC is an annual fundraiser for the North Carolina Student Section, with all proceeds going to funding student travel to the ASNT Annual Conference. Turnout was excellent with 14 members, 18 students, and 11 guests in attendance. Section Chair Bradley W. Brandt, CPCC Faculty Advisor Rodney B. Stephens, and North Carolina Student Section Chair Muriel Magloire made introductory comments. Charlotte Section Director Thomas (Tom) Flaherty of DETEK Inc. was recognized for his 50+ years with ASNT. Members and guests then enjoyed a chicken wing dinner and viewed product demonstrations from the participating vendors. The Section would like to thank all attendees, with a special thanks to all the vendors who participated. 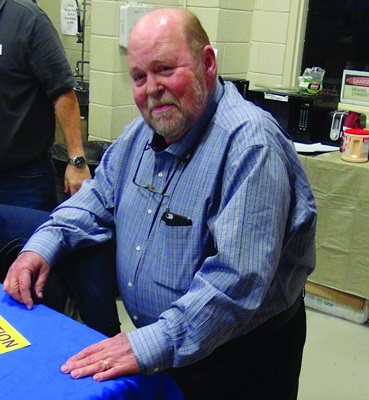 Charlotte Section Director Thomas (Tom) Flaherty was recognized for his 50+ years with ASNT at the Section’s meeting.

The Chattanooga Section held a meeting in February. Section Vice Chair Madison Hunter introduced the guest speaker Daniel A. Mitchell of Viking Industrial Inc. Mitchell, who is a Level II in VT, MT, PT, and RT, presented on his current experiences preparing for Level III examinations.

The Chicago Section exhibited at the annual DuPage Area STEM Expo on 22 February at the Rice Campus of the Illinois Institute of Technology, School of Applied Technology in Wheaton, Illinois. Hundreds of school-age children made their way through the crowded hallways to view the booths where scientific projects were set up to demonstrate various technologies.

The Section had a room where a number of NDT methods and techniques were on display. The students and their parents were able to scan parts with known discontinuities using ultrasonic and phased array testing, examine parts with liquid penetrant and magnetic particle indications under ultraviolet light, view a computed tomographic image as it was processed, examine seeded voids in a casting, and view the inside of a pipe weld using a video borescope.

The Great Salt Lake Section is celebrating its 75th anniversary this year. ASNT President Michael V. McGloin visited the Section to speak about the importance of mentoring and to present the Section with an acrylic recognition. 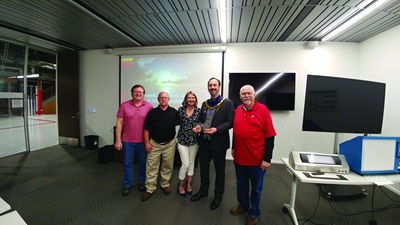 The India Section organized its fourth technical meeting of the program year at Hyderabad on 29 February with a PAUT demonstration. There were approximately 27 members in attendance and the speaker was Siva Sankar from GRC. The event was jointly sponsored by C/MOS Processor and Baker Hughes. 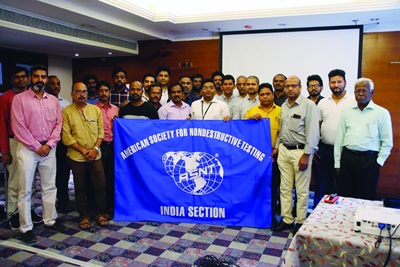 The India Section held their fourth technical meeting of the program year in February.

Members and guests of the Iowa Section’s February meeting.

The Lewis & Clark Section met on 10 March to listen to ASNT NDT Level III Christopher R. Andersen of PCC Structurals Division present on “Remote X-ray Read.” Attendees found the presentation to be enlightening, teaching listeners the issues faced along with solutions to combat them. Andersen touched upon the preparation needed to become Nadcap approved and what complications may arise in this new field. 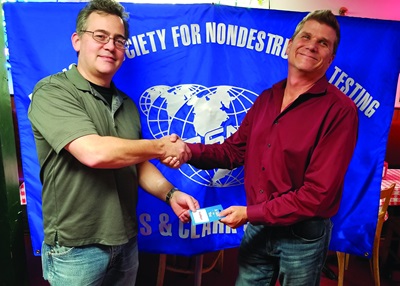 The Miami Valley Section met on 4 March at Miami Valley Gaming in Lebanon, Ohio, for a technical presentation on “Electromagnetic Spectrum: UV-Visible-Infrared” by L. Terry Clausing of Drysdale & Associates Inc. Clausing provided the Section with an interactive discussion on the electromagnetic spectrum and how it is used in NDT. Regional Director, Region 11 Gary E. Mathias presented a speaker’s gift to Clausing at the conclusion of the presentation. 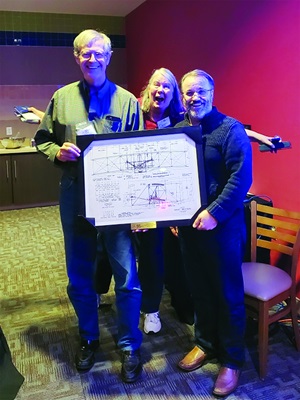 The Pacific Northwest Section met on 4 February with 18 members and guests in attendance at the Great American Casino in Tukwila, Washington. Jay Zimmerman of Carestream NDT presented on “Statistics in Digital Radiography – More Than Meets the Eye.” The Section felt his presentation was unique because as he presented on the topic, he also quizzed the attendees. Zimmerman, who is an active hiker, presented a slideshow with pictures of locations, and guests had to guess what state the picture was taken in.

The Piedmont Section held a technical meeting on 19 February at the Hilton in Greenville, South Carolina. Ten members were in attendance. Leo Going of GE Power presented on “NDT in the Space Shuttle Program.” Going’s presentation focused on NDT applications in the Vertical Assembly Building and Orbiter Processing Facility at NASA’s Kennedy Space Center. One application was a life extension program for window frames, which are designed for 25 flights. Radiographic testing was used to determine if they could be used longer. Another application was inspection of the reinforced carbon/carbon nose cap for damage caused during ascent. Other applications included infrared testing of the wing’s leading edge, testing for micro meteorite strikes, X-ray of the vertical stabilizer, and ultrasonic testing of the crawler tread castings. Going also commented on the inventory process for entering and exiting the vehicle, which is necessary to make sure that no tools are left behind that may cause a problem at liftoff. 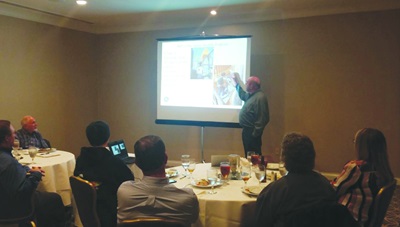 The Piedmont Section listened to Leo Going present on “NDT in the Space Shuttle Program.”

The Rockford Stateline Section held a technical meeting on 10 March at the Thunder Bay Grille in Rockford, Illinois. The speaker for the evening was Sales Manager Bruce A. Nuwash of Eddyfi Technologies. Nuwash’s talk was “PEC – Pulsed Eddy Current.” The discussion centered on new technology using eddy current instruments designed to test pipe wall thickness through insulation. Special probes are used to saturate the pipe with an electrical magnetic field and then allow a decay of the field. The resultant signal can then be analyzed for wall thickness and corrosion, regardless of whether it is on the inside or outside of the pipe. The system can cover large sections of piping in a relatively short period of time and therefore is useful for identifying trouble spots, which can then be investigated with other NDT methods to further identify system conditions. 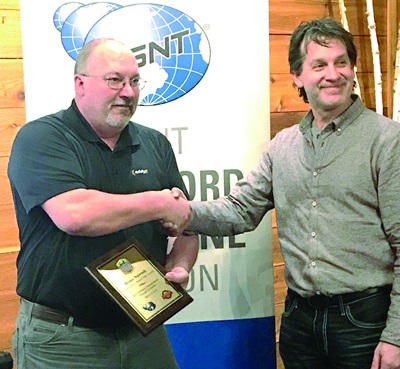 Rockford Stateline Section Chair Joel A. Mohnacky of Collins Aerospace (right) presented a plaque of appreciation to Bruce A. Nuwash of Eddyfi Technologies.

On 3 March, the San Diego Section hosted their sixth technical meeting of the 2019–2020 year. The meeting was held at the Seven Seas Lodge in San Diego, California, with 17 members and guests in attendance. The speaker for the evening was ASNT President and Regional Director, Region 15 Michael V. McGloin. The title of his talk was “The Value of Mentoring.” The Section thanked McGloin for his talk and presented him with a certificate of appreciation and a speaker’s gift. The evening concluded with the customary raffles and recognition of the Section advertisers/vendors: Mathew Kaparic of Advanced Test Equipment Rentals, Chris Dodgens of Pine Environmental, and Randy Jones of Baker Hughes. 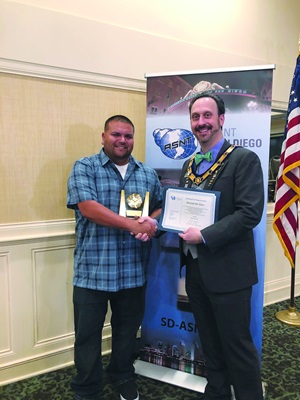 On the morning of 27 February, South Texas Section Vice Chair Jeremiah Rawls and Section Treasurer Glenn M. Light, Ph.D., visited the senior class of Frank Szarka at Marshall High School. Light gave a 30-minute presentation about nondestructive evaluation and testing technologies and then adjourned to a lab area where he and Rawls had ultrasonic and eddy current instruments set up for demonstration. The 23 students enjoyed using the eddy current material sorting technique to look at various things such as key rings, necklaces, and belt buckles. They also enjoyed detecting discontinuities in an aluminum plate with notches and a steel plate with a weld. The Section emphasized the potential for future career opportunities. The presentation material provided names of two-year programs, four-year programs, and postgraduate schools. 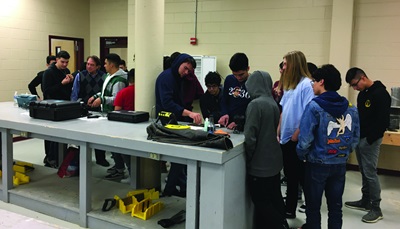 The Southern Africa Section had another very successful golf day at Benoni Country Club on 5 March. This annual event is becoming one of the highlights on the Section’s calendar. It was very well attended. Many prizes and donations were received this year, so the profit for the Section was higher than previous golf days. 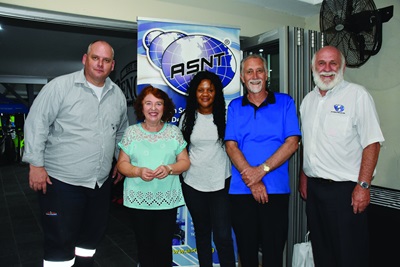 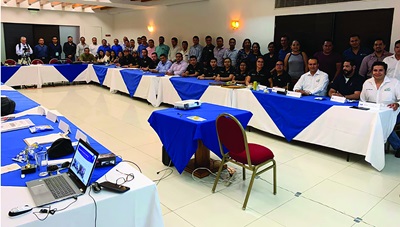 Members and guests of the Villahermosa Section at their February meeting.

The Chicago Section exhibited at the annual DuPage Area STEM Expo on 22 February at the Rice Campus of the Illinois Institute of Technology, School of Applied Technology in Wheaton, Illinois. The Section staffed a room where a number of NDT methods and techniques were on display, and students were able to scan parts with known discontinuities.