The Chicago Section met on 9 September with 22 guests and members in attendance at the Crazy Pour Restaurant in Villa Park, Illinois. The guest speaker for the evening was Richard Woodward, North American Sales Manager, DÜRR NDT GmbH & Co. KG. The title of his presentation was “Direct Radiography (DR) - A Technology Update.” The discussion centered on the varied techniques and types of digital detectors and systems available for the different industries that use digital imaging, and the improved sensitivity levels now available. A number of images were displayed demonstrating the different applications where digital technology is used, such as the automotive, power, oil and gas, aerospace, medical, dental, museum, and veterinary fields. Woodward showed the new software for viewing and performing process controls to validate digital images, as well as how to use the portable panels with Wi-Fi technology. Woodward also presented the advantages and disadvantages of each technology as well as the factors affecting resolution and signal to noise. In addition, two new guests were given an ASNT membership by the Section. 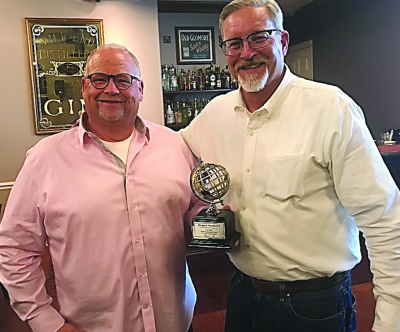 Twenty-two members and guests attended the Connecticut Yankee Section meeting at the Groton Elks Lodge 2163 on 17 September in Groton, Connecticut. A member from the Narragansett Bay Section and students from Three Rivers College in Norwich, Connecticut, were in attendance. Section Chair Rachel L. Taylor introduced the guest speaker, Eric Gingras, who is the business development manager for North Star Imaging. Gingras gave an enlightening talk on computed tomography, giving the audience a presentation that covered 2D radiographs, the use of DDA detectors, specimen rotation, and 3D volumetric reconstruction of the internals and externals of a specimen. Attendees enjoyed participating in the discussions that followed his talk. Taylor presented an ASNT vest to Gingras in appreciation for his presentation. 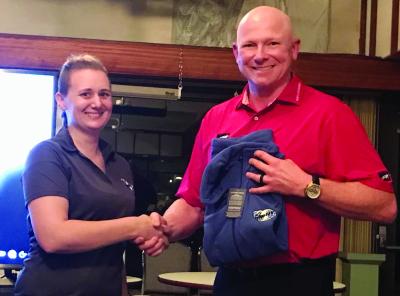 The Detroit Section held a board meeting on 10 September with five board members in attendance. The board discussed the next technical meeting, which was planned for 17 October at the Troy Civic Center. Gary E. Mathias is the invited guest speaker. He will present on acoustic resonance spectroscopy. Michigan NDT Inc. will sponsor the food for the meeting.

On 10 September, the Great Salt Lake Section met at the Joy Luck Restaurant in Woods Cross, Utah. Six members were in attendance to participate in an open discussion led by Section Chair Michael S. Lingbloom, who is an instructor at Ogden-Weber Technical College in Ogden, Utah. The title of Lingbloom’s presentation was “Nondestructive Testing Does Not Have Standards that Represent the Flaws Intended to Detect.” As the discussion proceeded, it became clear that although the title as written is true, the inspection processes are well controlled as long as the inspectors perform the process controls at the proper times, follow procedures, and the technique sheets are written properly and adhered to by the inspectors. The presentation ended with Lingbloom describing some of the standards that he has helped develop for custom projects. The meeting ended with an enjoyable meal provided by the Joy Luck Restaurant. 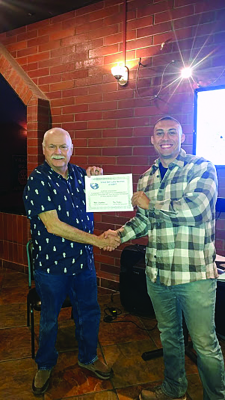 The Greater Houston Section met on 11 September at the Republic Grill at Battleground Golf Course, in Deer Park, Texas. Sixty-one people were in attendance, consisting of members, instructors, students, and guests. Bonnie M. Blanchard-Witter, recently elected as Section chair, opened the meeting with a moment of silence in remembrance of the lives lost on 11 September 2001. This was followed with a presentation to honor past section chairs, John Z. Chen, Timothy Scott Roach, and most recently John R. Huffman.

Blanchard introduced the meeting speaker, Justin Ng of Innerspec Technologies Inc., who gave a presentation and provided a demonstration on advancements in EMAT (electromagnetic acoustic transducer) and MRUT (medium range ultrasonic testing) technologies. Ng is the manager of the portable equipment team at Innerspec.

The Section wishes to thank its September meeting sponsors: AIP, Energy Industry Academy, MISTRAS Group Inc., NDT Texas, and Turbo NDT. The Section’s meetings are successful because of the generosity and continued support of these companies. 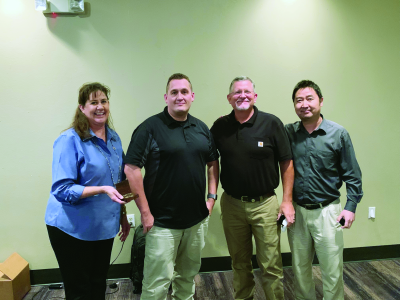 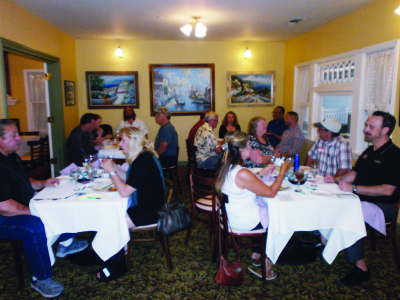 The Ventura County members of the Greater Los Angeles Section held a meeting on 4 September, which was attended by ASNT president-elect Michael V. McGloin (far right).

Additive manufacturing (AM) is the process of joining materials in a layer-by-layer fashion, as opposed to more traditional, subtractive manufacturing methods. The process enables the inclusion of features not possible with classical methods, such as complex internal and external features and gradations of material composition for some processes. While these geometries and composition variations are an enabling capability for design freedom and customization, uncertainty remains in the resulting material properties and defect distributions for AM parts as well as identifying appropriate means and methodologies to inspect them.

The Miami Valley Section met on 11 September at Premier Shooting Range & Training Center in West Chester, Ohio, to kick off the 2019–2020 program year. Sixteen members came out to participate in shooting practice with some friendly competition and to enjoy fellowship. It was a great time, and members are looking forward to the upcoming program year. 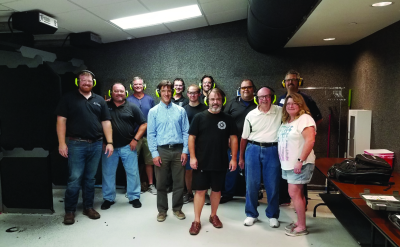 Members of the Miami Valley Section met at Premier Shooting Range & Training Center to kick off the 2019–2020 program year.

On 17 September, 18 members and guests of the Mohawk Hudson Section participated in a tour of STS Steel Inc., followed by dinner at Druthers Brewing Co. in Schenectady, New York. David Miles coordinated the tour and Greg Mohr coordinated the dinner.

STS Steel fabricates bridges for various departments of transportation, including New York, Connecticut, New Jersey, Rhode Island, and Massachusetts. STS Steel has approximately 42 employees who focus on engineering, drawing, review, and estimating. The tour focused on the replacement of the Westminster Bascule Bridge. STS Steel was chosen to fabricate sections for the new bridge, which is replacing the previous bridge that has been in use since the 1970s. The new proposed design replaces the two current double-leaf bascule bridges with two single-leaf bascule bridges. Additionally, the new bridges will be wider and will include the addition of a bikeway.

The Narragansett Bay Section held a meeting on 24 September at the Atwood Grill in Johnston, Rhode Island, with 33 members in attendance. Russel E. Jones of National Inspection & Consultants gave a talk on how to support quality assurance through NDT, which was well received. 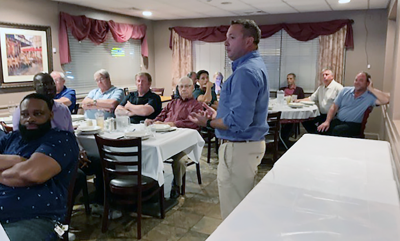 Attendees of the Narragansett Bay Section listened a talk on quality assurance at their September meeting.

The North Carolina Student Section held two meetings in August. Sixteen students and staff attended the first meeting on 22 August. A pizza lunch was served and attendees discussed plans for the program year, including the Section’s participation in the ASNT Annual Conference in Las Vegas, the vendors night fundraising event, and the 13th Annual George Pherigo Memorial Golf Tournament. The final order of business was the declaration of candidacy of those interested in serving as Section officers and board members.

On 29 August, the Section had additional discussion regarding fundraising efforts, a service-learning project, and the Annual Conference. Elections for Section officers and board members also took place. The following students will serve as officers: Muriel Magloire, chair; David G. Stuart, vice chair; Michael Magee, secretary; and Aumani Magloire, treasurer. Section directors are Marcel Ducharme, Timothy Gerard, Travis Macaluso, and Zechariah Patrum. The Section is excited about the activities that have been scheduled for the program year. 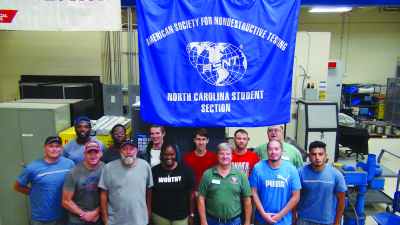 The Old Dominion Section held its first meeting of the current program year at Doraldo Ristorante Italiano in Williamsburg, Virginia, as a joint meeting with the Hampton Roads Section. Michael V. McGloin, ASNT president-elect, gave the main presentation on the importance of mentoring along with a few Society updates. Much of the ensuing conversation revolved around communications between sections, members, and the ASNT International Service Center in Columbus, Ohio.

Both sections took a moment to honor Regional Director William F. Via, Jr. (Regions 3 and 4), who retired from his career with the Virginia Department of Transportation after 37 years on 31 July of this year. The chair of the Old Dominion Section, Thomas (Ed) Darby, reviewed the plans for the upcoming year, reminding everyone that the Section will continue to meet at Calabash Seafood in Mechanicsville. Darby also invited all of the attendees to attend the Richmond Area engineer’s event in February and to work with the Hampton Roads Section to support the 2020 ASNT Research Symposium in Williamsburg, Virginia, in March. The 15 Old Dominion and Hampton Roads Section members and guests had a great time at the meeting. At the conclusion of the meeting, Darby presented McGloin with a Jefferson Cup as a token of thanks. 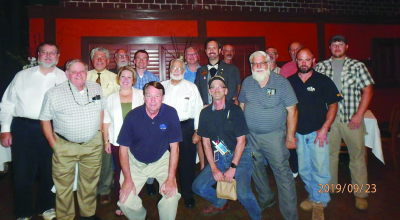 The Old Dominion and Hampton Roads sections held a combined meeting for their first meeting of the program year.

The Piedmont Section held a technical meeting on 18 September at the Hilton Greenville Hotel in Greenville, South Carolina, with 10 members in attendance. The speaker for the evening was Regional Director, Region 5, Hussein M. Sadek. Sadek is also a past president of ASNT. He is the founder of Technologies Consulting International (TCI) and serves as the president/CEO and director of NDE training. TCI specializes in electromagnetic testing of boiler tubes and heat exchangers.

Sadek presented on the topic of “New Developments in NDE Technologies for the Inspection of Boiler Tubes/Heat Exchangers.” His presentation covered eddy current array, remote field testing, partial saturation eddy current, flux leakage, and IRIS ultrasonic testing. Sadek outlined the principles behind each technique and gave its advantages and limitations.

The Rockford Stateline Section held a technical meeting on 10 September at the Thunder Bay Grille in Rockford, Illinois. The guest speaker for the evening was Stephen Berg of Berg Engineering & Sales, who spoke on the subject “Portable Hardness Testing.” Berg first reviewed the difference between stationary units and portable instruments and their governing specifications. The importance of surface preparation and the effect it can have on accuracy was stressed. Numerous different types of units were described along with the differences in the way the readings are obtained and calibration requirements. After the presentation, Berg demonstrated a number of units available in the marketplace. Everyone in attendance expressed appreciation for the presentation and its practical value. 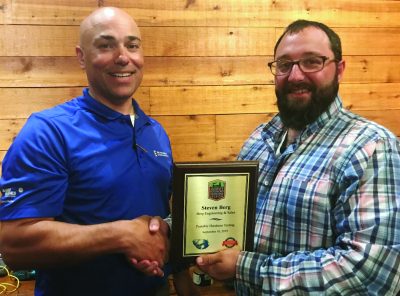 On 3 September, the San Diego Section hosted its first technical meeting of the 2019–2020 program year. The meeting was held at the Best Western Seven Seas in San Diego with 24 members and guests in attendance.

The speaker for the evening was Albert Liang. The topic of his presentation was “3D Ultrasonic Imaging of Structures Using SAFT and Wave Compounding with Application to Rail Inspection.” Liang is currently pursuing his Ph.D. in the Department of Structural Engineering at University of California San Diego under the guidance of Professor Francesco Lanza di Scalea, who was also in attendance along with several of his students.

The Section thanked Liang for his talk and presented him with a certificate of appreciation and speaker gift. The meeting concluded with raffles and the recognition of visiting vendors, including David R. Waitt from Fujifilm, Phil Fetto and Jason LaFavre from BASF/Chemetall, Gabriel Reyes from Kodak, and Matthew Kaparic from Advanced Test Equipment Corp. Monthly raffle prizes were sponsored by the San Diego Section, Larry G. Olsen of Northrop Grumman Corp., Fujifilm, BASF/Chemetall, and Kodak. 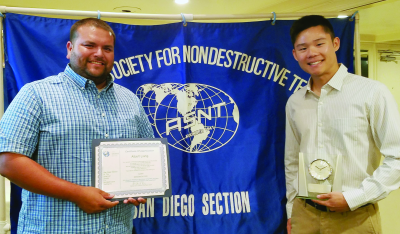 The South Texas Section held a meeting at the Tandoor Palace Indian Restaurant on 28 August with 12 members and guests in attendance (including a visitor from the North Texas Section). The group enjoyed a presentation by Mark Towner on the ASTM standard that is used for verifying that the monitor used to view digital radiography images is providing proper information to the analyst. Meeting attendees were impressed by how thorough the specification is and how complicated the process for digital image review is.

The Mohawk Hudson Section toured STS Steel Inc. for its September meeting. The tour focused on the replacement of the Westminster Bascule Bridge. STS Steel was chosen to fabricate sections for the new bridge, which is replacing the previous bridge that has been in use since the 1970s. 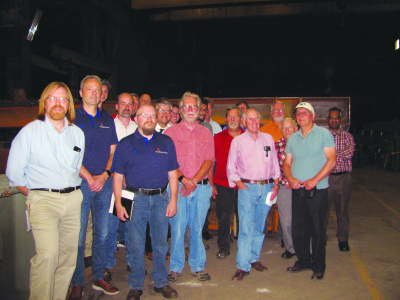