The Capital of Texas Section met on 15 November 2017 at M&M Engineering Associates in Leander, Texas, for a tour and discussion of the importance of failure analysis. The tour guide, Oscar Quintero (MS in Metallurgy and Materials Engineering from the University of Texas at El Paso [UTEP]), worked for Bell Helicopters and Delphi Automotive Systems and has extensive experience in root cause analysis. M&M Engineering was recently acquired by Acuren and use them to provide advanced NDT to support failure analysis in many different components across differing industries. Quintero showed the group the metallurgical tools used by M&M Engineering, including section preparation, electron microscopes, and automated microhardness testing. Six members and guests attended the tour, which lasted about an hour and a half. 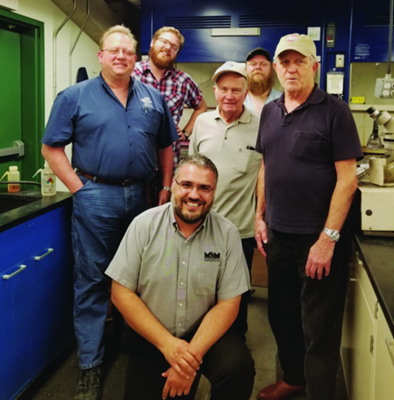 Oscar Quintero (kneeling), pictured here with members of the Capital of Texas Section, provided a tour of M&M Engineering Associates to the Section.

On 13 November 2017 the Charlotte Section met at Sticky Fingers Ribhouse in Concord, North Carolina, for a monthly meeting. The Section had anticipated a guest speaker who was unable to attend due to an unexpected business trip, but thankfully Dick Hooper was able to provide a presentation on “Nuclear Power Plant Design and Assembly.” The Section had a total of 12 members (including two students) attend this monthly meeting. Discussion about budget, potential student scholarships, and the annual Christmas party were held prior to the technical presentation. 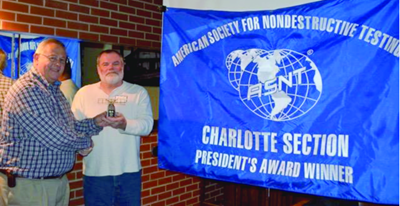 Charlotte Section Chair Robert Smilie (right) pictured with Dick Hooper (left), who gave a presentation to the Section during its 13 November meeting.

The Chicago Section met on 11 December 2017 and held an “End of the Year” meeting and party. The year was recapped, with the following highlights noted: the advancement of the Section’s student outreach program; the establishment of a scholarship fund; the increase in attendance at the educational meetings; the individual awards conferred on members at the Annual Conference; and the presentation to the Section for achieving Gold Status in the President’s Award.

The 17 attendees were challenged by a quiz on ASNT and Chicago Section history, along with various technical questions. Stuart A. Kleven of Alloyweld Inspection took home the first prize, an Amazon gift card; Sal Razi of Moraine Valley Community College won the second place prize (donated by the Section); and David R. Atkins of Unified Engineering took home third prize (from the host venue, Crazy Pour).

The Hampton Roads Section met on 14 November 2017 to hear LeDon C. Watkins present a briefing on the training he performs as a Hellier instructor. Six members and one guest attended. Bill Via, regional director, briefed the membership on the Annual Conference. The 2016–2017 Bronze President Award was delivered at this meeting. 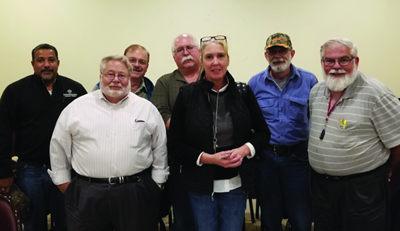 Attendees of the Hampton Roads Section’s 14 November meeting enjoyed a presentation on training and a briefing on the Annual Conference.

The Hawaii Section held its December quarterly meeting on 7 December 2017, at Buzz’s Original Steakhouse in Pearl City, Hawaii. In attendance were 10 members and guests. The agenda included the 2017 retrospection, action items, the 2018 schedule, and the January potluck picnic.

The retrospection discussion included participation in the November 2017 Kailua High School Career Fair and the receipt of a Section rebate. The action items discussion focused on the Section newsletter. A January 2018 issue is planned. Members are requested to provide a roster of recipients, including a list for their clients. Editor Jayme J. Martin will provide interview questions to two veteran members to answer for the newsletter. The planned 2018 quarterly meetings will be on 8 March, 7 June, 6 September, and 6 December. A January potluck picnic is in the works at a Pearl City park.

The India Section successfully conducted its third technical meeting of the year on 26 November 2017 at the Courtyard by Marriott Hyderabad. There were nearly 30 members in attendance, and the meeting was chaired by Loganathan Thangavel, the vice president of the Section. The secretary gave an overview of the 2016–2017 activities of the Section to the members. The technical talk was given by Mallu Venkata Reddy from Defence Research and Development Laboratory, and was titled “Advanced Radiography Testing on Aerospace Components.” The meeting was sponsored by C/MOS Processors, a channel partner of GE. 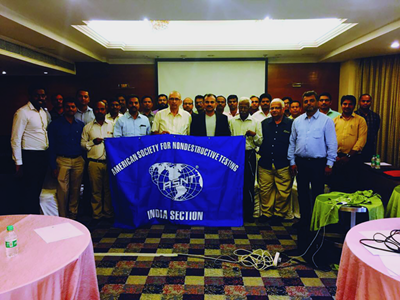 The India Section’s third technical meeting of the 2017–2018 year included a talk on radiographic testing on aerospace components.

The Metro NY/Northern New Jersey Section held a meeting on 29 November 2017 at the Press 195 Restaurant in Rockville Center, New York. Section Chair Toni Bailey opened the meeting with officer introductions. After dinner Larry E. Mullins, Sr. gave a presentation on the role of NDE in pipeline construction and maintenance, which was an informative topic that is relevant to the modern NDT field. Mullins was a great speaker, and the presentation seemed to capture everyone’s attention; attendees were surprised by the mileage of pipeline that is laid underground within North America, and how much work is involved with regards to maintaining it. The meeting also included a raffle giveaway. 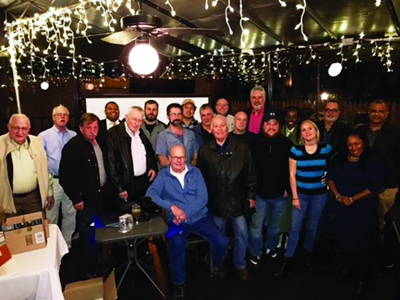 Attendees of the 29 November 2017 meeting of the Metro NY/Northern New Jersey Section enjoyed a presentation on the role of NDE in pipeline construction and maintenance.

The Miami Valley Section met on 8 November 2017 at Miami Valley Gaming for a very informative presentation titled “Advances in Resonant Ultrasound Spectroscopy for Materials and Component Characterization,” by Rasheed Adebisi, from the University of Dayton Research Institute. Eighteen members came out for the presentation.

The Mohawk Hudson Section held a meeting on 19 December 2017 at the Van Dyck Restaurant and Lounge with 35 members and guests in attendance. The meeting included a presentation titled “Advances In Wind Turbine Blade Technologies” by Shridhar Nath of GE Global Research in Schenectady, New York. As wind blades are getting longer and longer, the industry is looking at new ways to design and manufacture these blades to keep them cost competitive. The talk covered new technologies being introduced for the next generation of wind turbine blades. Materials, additive manufacturing, instrumentation, automation, and inspection technologies were some of the topics discussed.

The Mohawk Hudson Section held a meeting on 19 December 2017 that included a presentation on wind turbine blade technologies.

The Narragansett Bay Section held a meeting on 28 November 2017 at the Atwood Grill in Johnston, Rhode Island. There were 30 members in attendance. Region 11 Director Brenda L. Collins of Sherwin, Inc. gave a talk on liquid penetrant inspection and its applications. Region 1 Director John P. Moran and ASNT Past President John A. Stringer were also in attendance. All attending enjoyed the talk and asked many questions.

The North Alabama Section held a meeting on 14 November 2017 at the Redstone Arsenal Test Center. The meeting consisted of a technical discussion and tour, in which attendees were able to view and discuss radiographic and computed tomography images of hardware, as well as the test facility and inspection equipment setups.

On 28 October 2017, six students from the North Carolina Student Section and Section advisor Rand Ernst traveled to the ASNT Annual Conference in Nashville, Tennessee. While attending the conference, students visited the Exhibit Hall and were able to see the vast scope of the industry and be exposed to the new NDT technology available. Students met national leaders of ASNT and had the opportunity to network with industry professionals and potential employers. The trip was fruitful, as all students attending received at least one job offer. The Annual Conference was a great experience for all the students, and was made possible due to the participation of sponsors and golfers in the annual George Pherigo Memorial Golf Tournament.

On 30 November 2017, students and faculty from CPCC held a meeting to discuss the upcoming George Pherigo Charity golf tournament. This will be the 11th annual tournament and will be held Thursday, 19 April 2018, which is a change from the usual fall date. General details were discussed, as well as other ways to help raise money for the North Carolina Student Section. All raised money goes toward students making the trip to the ASNT Annual Conference, where students have always been able to find interviews and job opportunities. Last fall the Section raised enough money for up to nine students to make the trip to Nashville, thanks to generous donations.

On 27 November 2017, the Old Dominion Section held a technical meeting at Calabash Seafood in Mechanicsville, Virginia. Section member Robert E. Campbell, Jr. gave a presentation on revisions to the AWS B1 publications. Campbell, who is the chair of the B1 subcommittee, covered numerous topics, including the revision process to comply with ANSI, documents under revision, and attempts to combine several documents into a useful publication.

The Pacific Northwest Section held a meeting on 13 November 2017 at the Old Spaghetti Factory in Tukwila, Washington. Twenty-two attendees enjoyed a presentation by two speakers from VJ Technologies: Robert Maziuk (Level III RTR, who manages the high energy DR/CT facility in East Haven, Connecticut), and Mel Herrera (from the regional sales department). Maziuk and Herrera gave a presentation on the current state of computed tomography (CT) and showed how an entire car can be imaged to reveal all of the different materials inside. CT imaging has improved greatly and is also capable of finding porosity in plastics and metals in addition to identifying cracks.

The Section held a meeting on 11 December 2017 at the Old Spaghetti Factory that included a presentation on NDT automation. Automation is an ever-expanding part of NDT technology, increasing both speed and accuracy of jobs and changing some of the skills required, which is creating more opportunity to learn and advance in particular disciplines and fields of interest. Brian Ruhl and Whitney Moon from Genesis Systems Group, LLC made a presentation that was both interesting and educational. The evening was made more festive by the Board giving each of the 32 people in attendance a beautiful Christmas mug filled with candy. Everyone enjoyed the meeting while making connections and new friendships with other NDT folks. 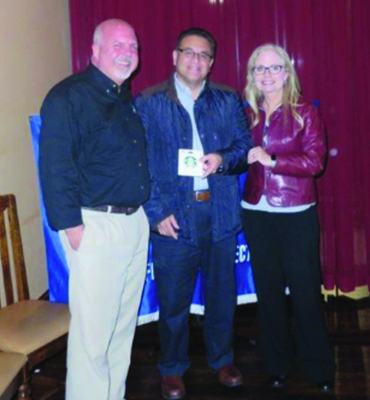 The Southern Africa Section held its Christmas dinner and final meeting of 2017 at Fahrenheit Seafood and Grill in Benoni. There were a lot of achievements during the year, including three well-attended technical evenings, a great family fun day, the most successful golf day to date, and another ASNT Bronze Award. Everyone is very excited for the upcoming year. 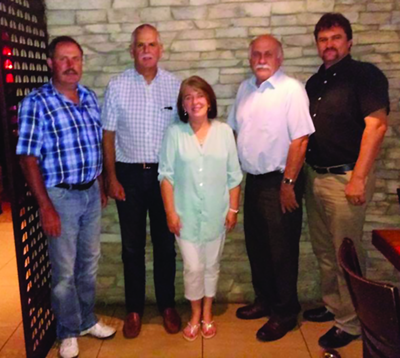 The United Arab Emirates Section held a board meeting in Dubai on 9 December 2017. The meeting was attended by seven members. Topics covered included creating a new Section logo with the assistance of the ASNT International Service Center, promoting ASNT to nonmember companies, and the Section yearbook. 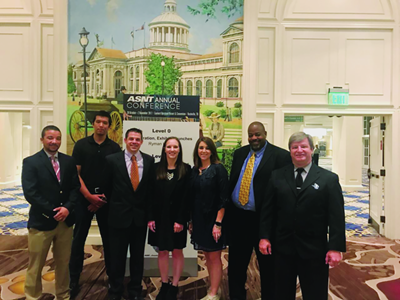 Thanks to the sponsors and players that participated in the George Pherigo Memorial Golf Tournament, the North Carolina Student Section was able to send a group of six students and Section advisor Rand Ernst to the ASNT Annual Conference. From left: Sport Frazier, Simon Trinidad, Zachary Baze, Ashley Stowe, Tamra Culp, Thomas Johnson, and Rand Ernst.