The Arizona Section held a meeting on 20 July. Dick Viduka from Phoenix National Labs, Inc. spoke on the evolution of nondestructive testing from 1961 to the present. 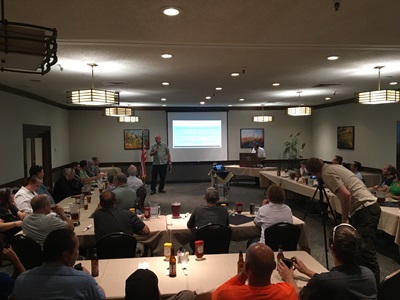 The Arizona Section’s 20 July meeting included a presentation on the evolution of NDT from 1961 to the present.

The Greater Houston Section’s July meeting was held at La Brisa in League City. The Executive and Board Committees were in attendance. The Executive Committee meeting was called to order by Rick D. Arnett. Special Committee issues were addressed along with the approval of the prior meeting minutes and the treasury report. The Executive Committee and Arrangements Committee had a lively discussion on what location the Section should utilize in September. The board reviewed the findings of a membership survey that asked the membership to vote on areas and locations within Houston that the membership would prefer to meet at. The committee agreed to review a few more locations and make a final decision at the August board meeting. It was decided next year’s golf outing and vendors night would be moved from April to March to occur when some similar technical shows are scheduled.

The Greater Philadelphia Section held a program planning meeting on 27 July. The meeting was hosted by PH Tool of Pipersville, Pennsylvania. Attending were seven of the current Section officers. The Section was not able to fill all pertinent positions to maintain stability. A decision was made that the Section would try to move some of the meetings to host companies as an effort to enable more technicians to participate in the programs. PH Tool; Laboratory Testing Inc., of Hatfield, Pennsylvania; and Mistras Group of Princeton Junction, New Jersey, have all volunteered to assist. The committee is currently working on the program schedule, including a celebration of the Section’s 75th anniversary.

The Saudi Arabian Section held its second technical dinner meeting for the fiscal year 2017–2018 on 14 August at the Carlton Al Moaibed Hotel. The meeting was attended by 84 members and nonmembers, including guests from the Bahrain Society of Engineers. Section Past Chair Fathi E. Al Qadeeb inaugurated the meeting and elaborated on the Section highlights. After the announcements, Al Qadeeb welcomed the guest speaker, Section Vice Chair Muhammad J. Anjum, and asked him to start his presentation entitled “Membership Benefits: Who’s Next?” After the presentation, audience members asked the speaker a few questions. Anjum emphasized the benefits of membership and showed a few slides illustrating these benefits, including career development, the opportunity to exchange information between sections all over the world, and access to publications and exams. The presentation was well received by the audience. After the presentation, as usual, door prizes were distributed to raffle winners by the Section past chair and Section vice chair. All the attendees were requested to join the dinner, which was prepared and arranged by the hotel banquet manager at the swimming pool of the Carlton Al Moaibed Hotel. 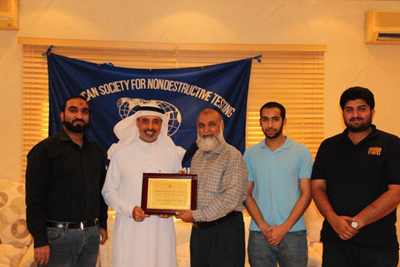 The Southern Africa Section held a small technical information evening on 13 July at the School of Applied Non-Destructive Examination in Impala Park. Chris Gouws of Spectrometer Technologies gave a presentation titled “Non Destructive Testing and NDF.” It was an enjoyable evening with a talk and a demonstration. Gouws invited everyone present to bring along any material that they wanted to analyze or know the composition of. The few who braved the icy weather were treated to piping-hot pizza! 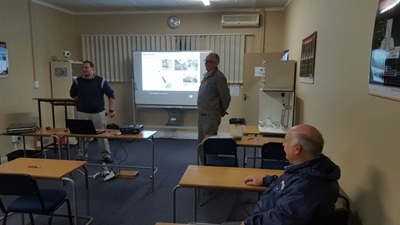 The board of the United Arab Emirates Section met on 12 August. Topics discussed included ASNT President’s Award results, new committee members, a budget review, and the promotion of the Section to nonmembers.

The India Section reviewed its 2016–2017 year and began planning for its 2017–2018 year during its meeting on 24 June in Chennai. New members were also initiated during this meeting, which had nearly 40 people in attendance. 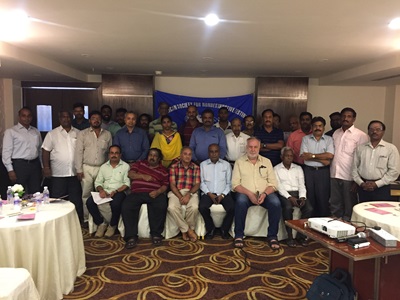 The India Section conducted a technical meeting on 24 June with nearly 40 attendees, during which new members were initiated and planning began for the 2016–2017 year.