The Central Ohio Section held a meeting at ASNT Headquarters in Columbus, Ohio on 21 November. There were 10 members, guests and vendors in attendance. Luke Yoder, regional manager of FARO Technologies, Inc., gave a presentation on “Coordinate Measuring Machines and 3D Imaging Devices to Solve Dimensional Metrology Problems,” a brief overview of coordinate measuring machines (CMMs) and 3D imaging devices using LEASR technology along with an explanation about how CMMs work. CMM technology from FARO permits high-precision 3D measurement, imaging and comparison of parts and compound structures within production and quality assurance processes. The devices are used for inspecting components and assemblies, production planning, documenting large volume spaces or structures in 3D, and more. The system allows users to maximize efficiencies and improve processes in areas such as machining, forging, casting, molding and assemblies. After the presentation, Yoder gave a live demonstration to inspect some samples. He also scanned the hand of Section Secretary Jing Ma in real time and reconstructed it into a 3D model. After the presentation, Yoder received a gift and certificate from Section Chair Brian Frye. The Section would like to thank Yoder for this informative and knowledgeable presentation. The vendor for the evening was FARO. The section would like to thank this vendor for its continued support. 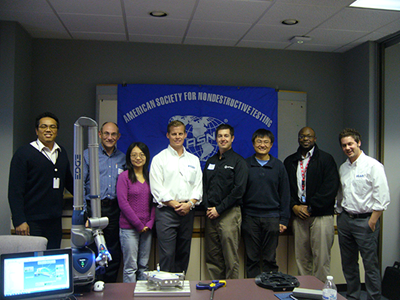 The Central Ohio Section gathered in November for a talk and demonstration featuring coordinate measuring machines.

Fifteen members of the Greater Houston Section’s board, committee chairs and members met at Brady’s Landing on 13 November for an executive committee meeting. Section Chair Jeff Wagner presided. During the meeting, a review and approval of the October’s meeting minutes and treasurer’s report were concluded. An open discussion of the Section’s member participation at the ASNT Annual Conference in Las Vegas was held. The Section goals were met during the Section Operations Council and the Certification Management Council open meetings. A thank you went out to all who attended and participated during the conference. The standing and board committee reports presented by the appropriate committee chairs. The main topics were the plans to move forward with the new Section website design and the Section’s approach to membership growth and sustainment.

Following the adjournment of the executive committee meeting, 60 members and guests attended a social hour and dinner. Following dinner the Section was honored to have Philip Bowers, a nondestructive testing (NDT) instructor at the Naval Air Technical Training Center, present as the November speaker. Bowers discussed the approach the U.S. military takes to NDT training. Bowers was thanked for his service to the country and also for taking time to present. 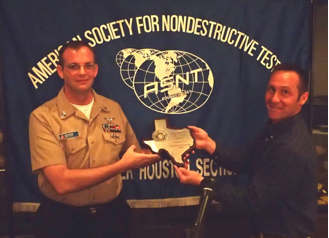 Jeff Wagner (right) presents a plaque of appreciate to Dennis Hudley (left) for his presentation.

The Greater Los Angeles Section had “A Night to Remember in a Field of Dreams” on 15 June at Dodger Stadium, which overlooks Los Angeles from its perch atop Chavez Ravine. Over 130 Section members, friends and family had the ballpark almost exclusively to themselves for two private group tours of the stadium (including the field, dugouts, clubhouse, trophy room, press box and a luxury box), as well as an appetizer reception, followed by a buffet dinner banquet in the Dodgers’ exclusive Stadium Club restaurant. After dessert, the Section conducted sponsor, board, lifetime, teacher and student recognition. Bob Clifton, Duane Schultz and Richard Witherspoon were acknowledged for their many years of service as instructors at Don Bosco Technical Institute for the Section’s adult education program, and Jim Davis and Linda Davis were feted with a lifetime service award for their decades of service in numerous capacities to the Section.

The Section officially began the 2013–2014 year at its September meeting with more than 40 members, guests and Bosco adult students. Tim O’Donnell, technical manager of the propulsion, thermal and materials engineering section at the California Institute of Technology’s world-renowned National Aeronautics and Space Administration Jet Propulsion Laboratory (JPL), continued the first anniversary celebration of the landing of JPL’s Mars Science Laboratory rover (also known as Curiosity) with his excellent and engaging talk: “Curiosity on Mars: Challenges Getting a One Ton Rover Safely on the Surface of the Red Planet.” O’Donnell is a graduate of the high school and junior college program at Bosco, where he majored in metallurgy. While a student at Bosco, one of O’Donnell’s metallurgy teachers was Fred Padilla. The Section thanks O’Donnell not only for his talk, but also for his decades of dedicated service to the Section’s continuing education program at Bosco, where O’Donnell has taught the “Introduction to Materials and NDT” class for over 25 years.

Everyone was a winner who attended the Section’s 2013 annual golf tournament and banquet at the Pacific Palms Resort in Industry Hills, California on 5 October. Thanks to great weather, generous sponsors (Aircraft X-Ray Labs, Inc.; Chemetall-Oakite; Integrated Quality Services; L.A. X-Ray/BG Detection Services; Met-L-Chek; MPM Products, Inc.; Sherwin, Inc.; Test Equipment Distributors, LLC; and Willick Engineering Co., Inc.), and the hard work of the Section golf committee (Brianna Buchanan and Dan Buchanan, Cheryl Dufur, Jim Ellington and Dave Waitt), more than 85 golfers enjoyed a fun day on the links and a meal (which included over $2,000 worth of golf prizes) to finish off the day. Photos were provided by Matt Ellington.

On 8 October, for its meeting at Maggie’s Pub in Santa Fe Springs, California, the Section hosted 45 members and guests, including 18 students, for an evening focused on radiography. Michael McGloin, of NDT Enterprises and Hellier, delivered a one-hour principles, applications and limitations pre-dinner talk, “Introduction to Radiography,” to 11 interested attendees. After dinner, everyone enjoyed a talk by Oliver Ruzek, of Dürr NDT, GmbH & Co., KG, who spoke on “Technology Updates in Digital and Computed Radiography.” 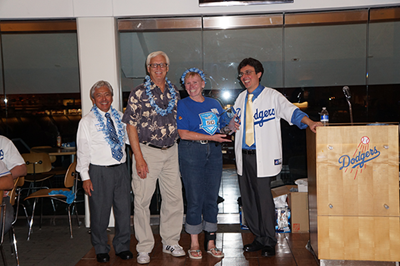 The New Orleans Section hosted 35 members and guests at its November membership meeting, held at Copeland’s restaurant in Harvey, Louisiana. The speaker, Charlie Speed, an independent corrosion engineer/consultant, gave an informative speech, titled “Corrosion: It’s a Battle Out There.” The talk related to different corrosion mechanisms, discussed how many times these risks are not limited to only one mechanism, and allowed all those present to understand some of the key concepts of corrosion protection and prevention. PetroChem International sponsored the meeting, which the Section greatly appreciated. 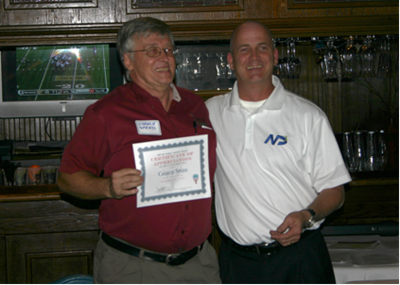 In honor of completing the Section yearbook, Old Dominion Section members decided that an evening away from the usual Italian Kitchen was a good idea. There were approximately 10 members who met for dinner at Capital Ale House, located in downtown Richmond, Virginia. Regional Director Bill Via gave an update on regional events as well as an update from the ASNT Annual Conference. The group also discussed upcoming nominees for the awards that are due in February. The group was pleased with the two new faces at the meeting, Jeffery Bly and Douglas Miles. 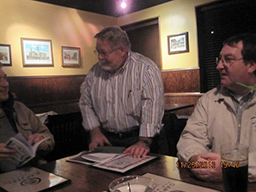 The November technical meeting of the Pacific Northwest Section was held on 14 November at Razzis Pizzeria in Seattle, Washington. The evening’s presentation was by Richard Bossi, of Boeing. He presented on “The Quest for Nondestructive Materials Characterization,” which he first presented at the ASNT 22nd Research Symposium as the recipient of the Research Award for Sustained Excellence. Prior to the presentation, the 21 members present enjoyed dinner.

The Section will purchase up to five new one-year ASNT memberships for non-members that attend a Section meeting. Each member who signed the guestbook is eligible for a year-end drawing where $30 per meeting is accumulated for a pot at the end of the year. The more meetings one attends, the greater the chances of winning. To win, one must be in attendance at the last meeting of the year. Roy Goodall has won three consecutive years. At the conclusion of his presentation, Vice Chair Kathy Ferguson presented Bossi with a Starbucks gift pack of select coffee. 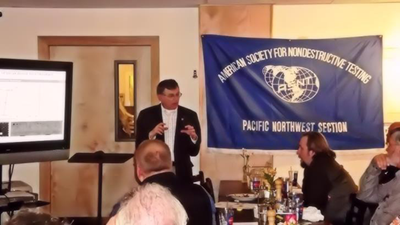 The Qatar Section held its inaugural meeting on 26 October at the EADS Competence Center, an ASNT Corporate Partner located in the Qatar Science and Technology Park in Doha, Qatar. EADS, which is now known as the Airbus Group, is a group of companies that includes Airbus, Astrium, Cassidian and Eurocopter. There were 27 members in attendance. Abdulwahab Aroussi opened the meeting with a short presentation about the center and introduced Regional Director Marwan Basrawi to present the Section’s charter and banner. Basrawi followed with a series of presentations about ASNT and its regional activities that span the Middle East. He also advised the members about how to keep the Section active and report for it to realize the full benefits of ASNT. Interim Section officer appointments were made by the consensus of the members in attendance. The interim Section officers will lead until the first Section elections may be held in 2014. A tour of the center’s facilities was given to members after the presentations. 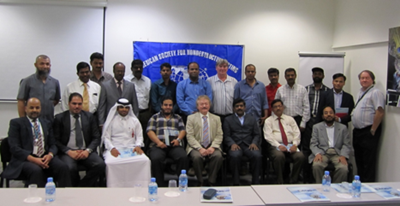 Members of the Qatar Section met in October for a series of presentations and facility tour.

The Southern Africa Section had an interesting technical evening on 20 November. Fritz Van Biljon, the technical manager at Steel Test Pty., Ltd. gave a presentation on “Eddy Current Tube Inspection.” He also gave a live demonstration using an Olympus MultiScan MS5800 with MultiView software and an Eddyfi Ectane with Magnify software. Everyone present was able to see this equipment in operation using standard reference samples to interpret indications. This was followed by a lively question and answer session. The speaker then handed out calendars, and Mark Du Plessis, from H. Rohloff Pty., Ltd., gave everyone battery chargers as gifts. The topic attracted quite a large audience and the evening proved to be a successful finale to a productive year for the Section.

A number of techniques comprise the electromagnetic testing method, the most notable being eddy current testing. In November, the Southern Africa Section was treated to an educational demonstration using this technique for the inspection of tubes. 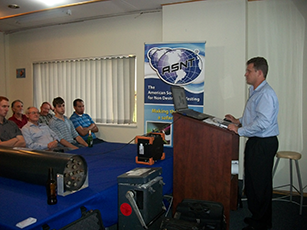