The Charlotte Section hosted 15 members and guests at its 10 February meeting at the Hickory Tavern. Section Chair Don Duncan welcomed everyone and thanked the meeting sponsor: NDT Seals, Inc. The honored guest was Matthew J. Whelan, assistant professor at the University of North Carolina Charlotte, Department of Civil and Environmental Engineering. The presentation was “NDT for Post-fire Assessment of Concrete Structures.” 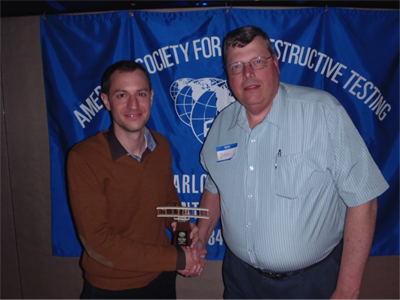 Matt Lorenz, president of Michigan NDT, presented an “Introduction to Phased Array Testing” at the Detroit Section meeting on 20 January. Eleven members and guests were present at Hogan’s restaurant in Bloomfield Hills, Michigan. Prior to dinner and the presentation, Section Chair M.E. Gase asked the group for self-introductions and asked a general question: “What is your biggest obstacle in the NDT field?” The responses were that there are not enough nondestructive testing (NDT) technicians or candidates for the NDT field and that many certified technicians lack adequate skills. The Section will explore those responses in future meetings. Lorenz’s presentation was well received, and all came away with a better understanding of phased array technology.

Members of the Detroit Section met in January for a presentation on phased array testing.

Eight members of the Greater Houston Section’s board, committee chairs and members met at Brady’s Landing on 12 February for an executive committee meeting. Section Chair Jeff Wagner called the meeting to order. During the meeting, a review and approval of the meeting minutes from January were conducted. The standing committee reports were addressed with the main topics discussed. The main topics included the design of the new Section website to be unveiled in the near future and the Scholarship and Technician of the Year awards.

The February meeting also served as the Section’s annual meeting to honors its spouses and past chairs. There were 56 members and guests present. Several of the members’ spouses were present to be honored. The Section thanks all the support from these spouses. It was also a privilege to honor all of the past chairs. The seven past chairs in attendance were: Greg Hudkins, Ron Hayden, Syl Viaclovsky, Chuck Woodruff, Jerry Fulin, David McGrath and Al Baker. Special thanks goes out to each of the past chairs for unselfish dedication and mentorship to the growth of the industry and the Section.

Following dinner, Cory Rogge, from the Museum of Fine Arts of Houston, commanded the attention of all attendees with a presentation describing a side of the nondestructive testing (NDT) industry most people do not think about, the authentication of fine art using various NDT methods and techniques. 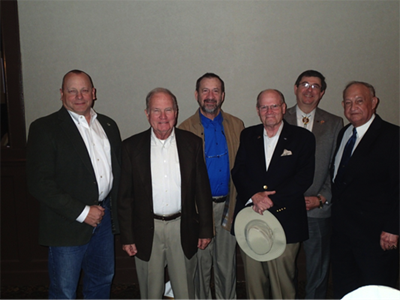 On 11 February, the Hampton Roads Section met at the Peking International Buffet restaurant. Fifteen members and guests attended the meeting. Tommy Boyers, of Sonatest, Ltd., provided an interesting presentation on “Phased Array and its Benefits.” In addition to the presentation, Boyers brought ultrasonic equipment to the meeting for hands-on activities. 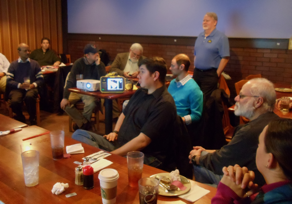 The Hampton Roads Section met in February for a presentation.

The Nigeria Section had its monthly general meeting on 22 February in Warri, Delta State with 16 attendees.

The meeting began with a welcome and announcements from Section Secretary Afolabi Ajibola. He shared with the group that Ogunsola Olawale had been asked to be a co-coordinator and will help communicate Section meeting dates, times and activities to members in the Lagos State. Additionally, Ajibola reminded attendees that registration for the ASNT 23rd Research Symposium was open and that interested members should apply for travel visas. Ajibola’s third and final announcement was that Section officer elections were going to be held during the May meeting.

After the opening announcements, Section Chair Henry Chimezie gave a presentation on the “History of ASNT Nigeria and Challenges Facing African NDT Organization in Self-reliance and Sustainability.”

Ajibola concluded the meeting by reminding everyone that the 2013–2014 membership campaign was underway and asked everyone to recruit new members.

The North Carolina Student Section held a meeting on 24 January at the Harper Campus of Central Piedmont Community College, with 18 students and faculty present. Section Chair Rodney Stephens welcomed new students and talked about the importance of joining ASNT. Also discussed were fundraising possibilities for the Section to be able to send as many students as possible to the ASNT Annual Conference, to be held in Charleston, South Carolina, this year. The group also discussed the upcoming elections for the Section officers, which were held in April.

As the members enjoyed a pizza lunch, the guest speaker was introduced as Don Duncan, Charlotte Section chair and quality control supervisor in charge of nondestructive testing (NDT) with U.S. Airways, Inc. Duncan talked about how he got involved with NDT and opportunities in the aerospace field for NDT professionals. It was a very interesting presentation that sparked a lot of interest among the students present. 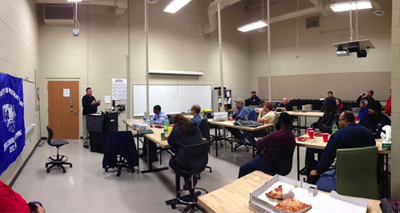 The Old Dominion Section held a meeting on 20 February, at the Jefferson Hotel in downtown Richmond, Virginia, in conjunction with the Richmond Joint Engineers Council banquet. Nine members and guests of the Section attended the banquet to recognize local student efforts in advancing their engineering understanding and education and to hear the keynote address delivered by Jennifer Stern, space scientist with the planetary environments lab of the National Aeronautics and Space Administration. Stern spoke about the ongoing experiments using a rover delivered to the surface of Mars last year and the many tests the rover is able to perform onsite. The primary objective is to determine if life could have existed on Mars for some period in the past when temperature and atmospheric conditions were more favorable. The rover has several sensors using both destructive and nondestructive techniques for measuring the soil, looking for particular elements and compounds common in life on Earth. 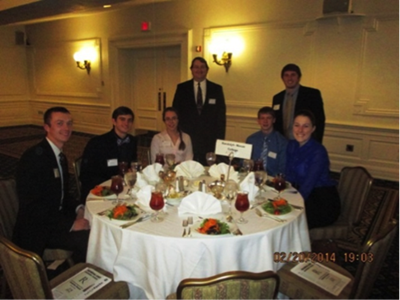 The San Diego Section hosted a meeting on 4 February at the Best Western Seven Seas hotel, with 12 members and guests in attendance. The guest speaker for the meeting was Francesco Lanza di Scalea, professor of structural engineering and director of the nondestructive evaluation and structural health monitoring laboratory at University California San Diego (UCSD).

The presentation was on ongoing research at UCSD focused on two primary issues in railroad engineering maintenance: rail discontinuity detection and rail thermal stress measurement. Both issues are at the top of the list of causes of train accidents.

Lanza di Scalea’s presentation sparked several questions not only on discontinuity detection but also discontinuity development and the study of thermal stress management. The presentation also described the equipment locations throughout the U.S. where research testing was performed, which included the research field laboratory at UCSD. 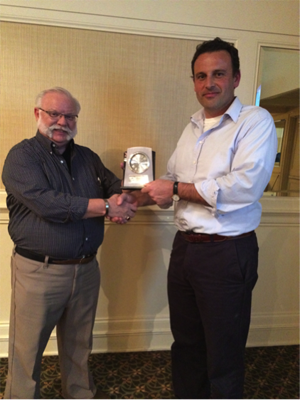 The Saudi Arabian Section held its eighth technical dinner meeting for the fiscal year 2013–2014 on 17 February at the Carlton al Moaibed Hotel in Al Khobar, Saudi Arabia. The meeting was attended by 135 members and guests and was sponsored by the Section.

Section Board Chair Mohammad S. Al Salih inaugurated the meeting with a warm welcome. He elaborated on some of the announcements, including the Level III exams that took place in April.

Section Chair Mohammad Abu Four talked briefly about the Level II exams that were held for the first time in April under the sponsorship of the Section. He also talked about the benefits for Level II and replied to queries from the audience.

After the announcements, Abu Four invited Alireza Akhlaghi, from Proceq, Switzerland, to start his presentation on “Portable Metal Hardness Testing for Quick Tests and to Reduce Maintenance Costs.”

After the presentation, the normal question and answer period was held, and an appreciation plaque was presented to the guest speaker. Door prizes were distributed to the lucky raffle winners during the last part of the meeting. After the prize distribution, members and guests retired to a buffet dinner served by the Carlton al Moaibed Hotel. 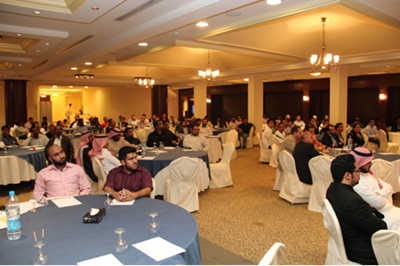 Saudi Arabian Section members and guests listened to a guest speaker presentation on 17 February at the Carlton al Moaibed Hotel.

The Southern Africa Section had a productive start to the year. The 5 February meeting covered plans for the Golf Day on 13 March at Benoni Country Club, which was co-hosted with the South African Institute for Non-destructive Testing. It was a fun event for the local nondestructive testing community in Gauteng, South Africa.

Refresher sessions for the March ACCP and ASNT examinations were also running in February. There were a lot more ACCP Level II candidates this year, which is very exciting for South Africa. This interest is fueled by major industry players having formally accepted ACCP as ISO 9712 compliant.

Committee members are determined to work hard to get as many points as possible during the next year. They have planned a student outreach program, some interesting guest speakers and another social event.

The Nigeria Section held a meeting in February. During the event, attendees discussed an initiative to work on strengthening relations with the nondestructive testing industry in Nigeria and to recruit new Section members. 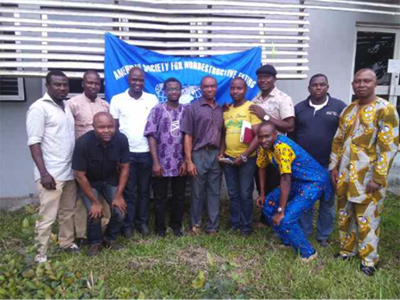