The Section would like to thank Catanzaro for his presentation.

The September meeting of the Greater Philadelphia Section was held jointly with ASM International on 18 September at Williamson’s Restaurant in Horsham, Pennsylvania. Twelve ASNT members and a number of ASM members attended. After dinner, William A. Wulfsohn, president and CEO of Carpenter Technology Corp., gave a presentation on the history of Carpenter Technology, its current capabilities and new facilities, and a brief look at the company’s future.

The October meeting was held at the Crowne Plaza hotel in Trevose, Pennsylvania. Thirteen members and guests attended. Fred Trach, quality consultant to Custom Alloy Corp., gave a lively presentation on “A Historical Journey Through the Challenges of Metals Identification and Sorting.”

The Hampton Roads Section had a joint meeting with the Old Dominion Section on 13 October at Rocco’s Smokehouse Grill in Williamsburg, Virginia. There were eight members and three guests in attendance, including Regional Director William Via. The members and guests heard Ricky Morgan, president of Morgan Inspection Solutions, LLC, speak about how nondestructive testing was used in the construction of the world’s tallest ferris wheel, “The High Roller,” which is located in Las Vegas, Nevada.

The opening event for the Mohawk Hudson Section on 20 September included a tour of the USS Slater. The Slater is a one of only a few destroyer escort ships from World War II still in existence. She is the only one still afloat in the United States. After a two-hour tour, members and guests enjoyed lunch and conversation at a local restaurant. 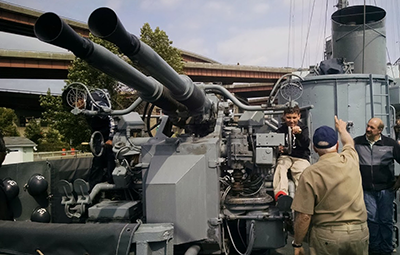 Members and guests of the Mohawk Hudson Section met in September for a tour of the USS Slater.

The North Texas Section would like to thank its members for attending the 16 October meeting at Pappadeaux restaurant. Attendees had a great time socializing and learning about the many sponsors and the products and services they offer. The sponsors for this year were each presented a plaque as a show of gratitude for their contribution. The Section once again thanks its sponsors. 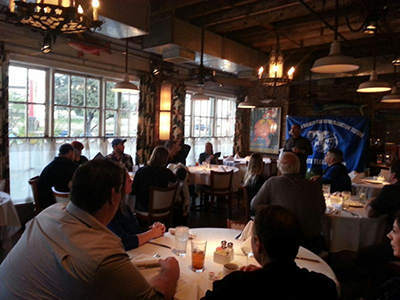 The North Texas Section met at Pappadeaux restaurant in October.

The OKC Section meeting was held at Crossroads Institute in Oklahoma City, Oklahoma. Eighteen guests and members enjoyed catered barbeque from a local restaurant. Walt Matulewicz presented a plaque to Mark Stowers in appreciation of his work in forming the Section. Matulewicz will be the Section’s immediate past chair this year, and he was presented with a plaque in gratitude for his service as the Section chair for 2013–2014.

John T. Marx, owner of The Inspection Group, LLC in Oklahoma City, spoke at the 16 October Section technical meeting. He has a bachelor of science degree in welding engineering technology and more than 37 years of inspection and testing experience. He is an ASNT NDT Level III in MT, PT, UT, and RT and is an American Welding Society Senior Certified Welding Inspector. His topic was “Advantages and Disadvantages of the Four Primary NDT Methods.”

Section members are looking forward to hearing from Flynn Spears, director at large for ASNT, at its next technical meeting on 15 January, whose presentation will be titled “Laser Shearography of Aerospace Structures and Components.” 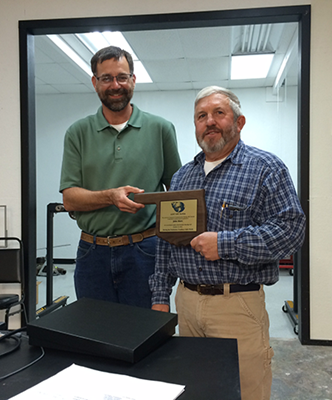 On 13 October, Old Dominion Section held a joint meeting with the Hampton Roads Section at Rocco’s Smokehouse Grill in Williamsburg, Virginia. The meeting was attended by 23 members and friends of ASNT. Attendees discussed current Section business, and received a presentation on the design, fabrication, installation, and (most importantly) inspection of the High Roller ferris wheel in Las Vegas, Nevada from former ASNT President Ricky Morgan. Regional Director Bill Via also presented a report, which stated that both sections will receive the Gold Award at this year’s Conference. Overall, it was a successful meeting.

The San Diego Section hosted its first technical meeting of the 2014–2015 year on 2 September. The meeting was held at the Best Western Seven Seas hotel, in San Diego, California, with 18 members and guests in attendance.

The Section then recognized one of the students from the PT Level I course who was in attendance.

Larry Olsen, past chair 2013–2014, honored McKay with the Section’s Chair Meritorious Service Award for 2013–2014. McKay has served the Section for many years as a Section officer, director, and science fair chair. The award was well past due for a dedicated Section member.

The meeting closed with the evening raffle of prizes and a 50/50 cash raffle. All in attendance had a great time.

On 7 October, the Section hosted its second technical meeting of the 2014–2015 year. The meeting was held at the Best Western Seven Seas hotel, with 25 members and guests in attendance.

The speaker for the meeting was Randy Jones. The presentation covered the basics of eddy current testing, with principles, applications, and limitations.

A discussion on old technology versus new technology was a hit for many of those in attendance with no or limited knowledge of the eddy current testing technique. Section Chair Hans Weber presented Jones with a certificate of appreciation and a gift for his presentation.

In his presentation to the Greater Philadelphia Section, Fred Trach covered the simple identification of the metals known to the ancients, to spark testing, chemical testing, X-ray fluorescence, and a detailed description of spectroscopy. 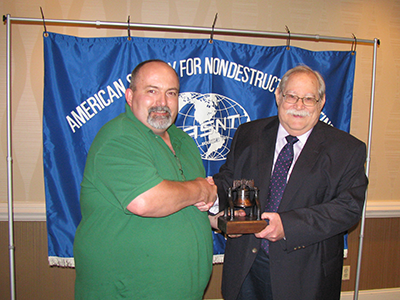